I know it’s a seriously abused and unoriginal title for this post but I am in Viet Nam and everywhere I go in this sometimes confusing country, I see ghosts and remnants of the the Viet Nam war and I hear Robyn William’s running dialogue in my head.  I can’t escape either. The sixties were my formative years.  Every generation has its ‘911 moment’ but for me it was an entire decade.  The war in Viet Nam was broadcast into our living room every night in all its technicolor glory, narrated calmly and dispassionately by Walter Cronkite and field journalists for the CBS Evening News.  Remote places with exotic names like Mekong Delta, Saigon, Da Nang, Na Trang, Hue and Ha Noi echoed in our little house in North Vancouver, and later a village called My Lai.  Broadcasts always accompanied by the staccato of machine gun fire, graphic scenes of explosions and panicked Viet Namese, and in the background the constant fibrillation of the massive Huey helicopters that became the brand of the long and devastating conflict.  These are the memories that are never far from mind as I travel Viet Nam from north to south.

Some countries are easier to travel in than others.  Differences in language, currency, food, transportation, customs and culture all make for more adventurous travel.  Viet Nam has all of those differences and is a Communist regime to boot – the second such system I’ve experienced, the first being Cuba.  I love this kind of travel – the excitement of being almost lost, the fun of re-learning the simplest acts in a different environment, and the constant reorienting necessary for day to day survival.  Having said that, I have to confess for this tramp through completely new territory I took a somewhat easier path – hooking up with a small, local tour company Viet Nam Small Group Tours. This is a cottage business operated by Ian, an ex-pat Aussie and his partner, Hac a native of Hue.  Check out my review on Trip Advisor – highly recommended.  I was a small tour group of one on this last tour before Christmas for Ian and Hac, so they customized the itinerary completely for me.  I got to all the places I wanted to see but I also had all-important time to explore on my own with my camera.

A word or two about Viet Nam.  This is a communist country. Canadians need a visa to come here.  You can apply for a visa letter online and bring it to the airport at the point-of-entry, in my case Ha Noi.  The approval letter, a couple of passport photos and $25 US gets you the privilege of joining the noisy throng at Noi Bai airport jammed up against a plywood counter, trying desperately to get the attention of a single, expressionless, epauleted and medaled official to submit your paperwork.  When he does take your papers (and passport!) it goes to the bottom of a large stack that’s transferred to the desk of another, more decorated official with a row of important looking stamps.  And then you wait.  And wait.  There is no system in place for expediting the process.  It’s chaos.  All overseen by a Big Guy in a Big Hat sitting placidly at a Big Desk at the back of the area keeping a seriously intimidating eye on everyone, alert to any sign of frustration or rebellion.  Bring some patience with you to Viet Nam.  It helps.  I thought seriously in the hour that I waited for my visa about tweeting out my experience.  Then I thought about living under a communist system, of how easily a so-called innocent comment can be mis-construed and of the fact that I had provided my email address (which is also my Twitter handle) to the authorities for my visa application…and thought better of it.

I chose to see Viet Nam from north to south – Ha Noi to Saigon – but starting at Ha Noi is like jumping into the deep end!  Viet Nam is a long, narrow strip bordering the South China Sea or, as its referred to in Viet Nam – the East Sea.  The difference in terms is critical as China attempts to extend its territorial reach and its fishing rights into the East Sea by building islands on coral atolls off the coast of Viet Nam – an activity very much disputed by Viet Nam.  There is a Cold War of sorts happening at the moment which has dramatically reduced the number of Chinese tourists to Viet Nam, with the predictable impact on their economy.

Some 94M people live here in a country about one-thirtieth the size of Canada. It’s cities are crowded with tall, narrow buildings and its streets and sidewalks are jammed with honking trucks, cars and millions of motor bikes – the most popular and practical way to get around.  There are apparently some 40M motor bikes in Viet Nam.  I think I saw them all!

This group of fruit and flower vendors have set up between lanes of roaring motor bikes in the middle of a three way intersection. 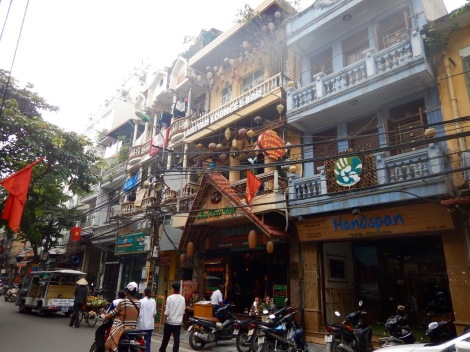 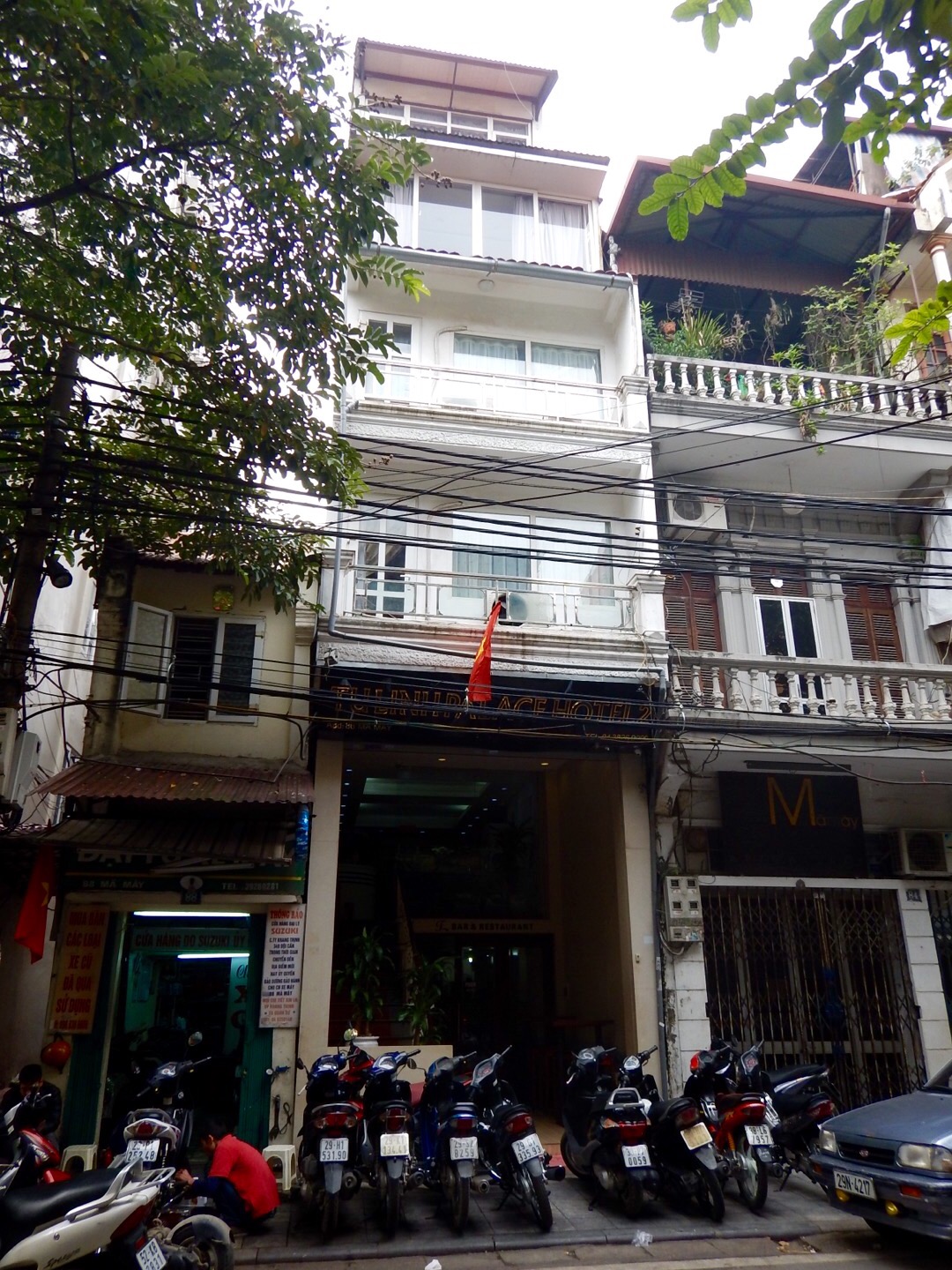 The Tu Linh Palace is pretty typical of an Old Quarter hotel. I was glad to be traveling with only a backpack, as I don’t think I could have wrangled a suitcase along the street and between parked motor bikes. My room was about the width of the building and just accommodated the king size bed wall-to-wall. I had to crawl in from the foot of the bed. But it was clean, with a decent bathroom and very eager-to-please hosts. 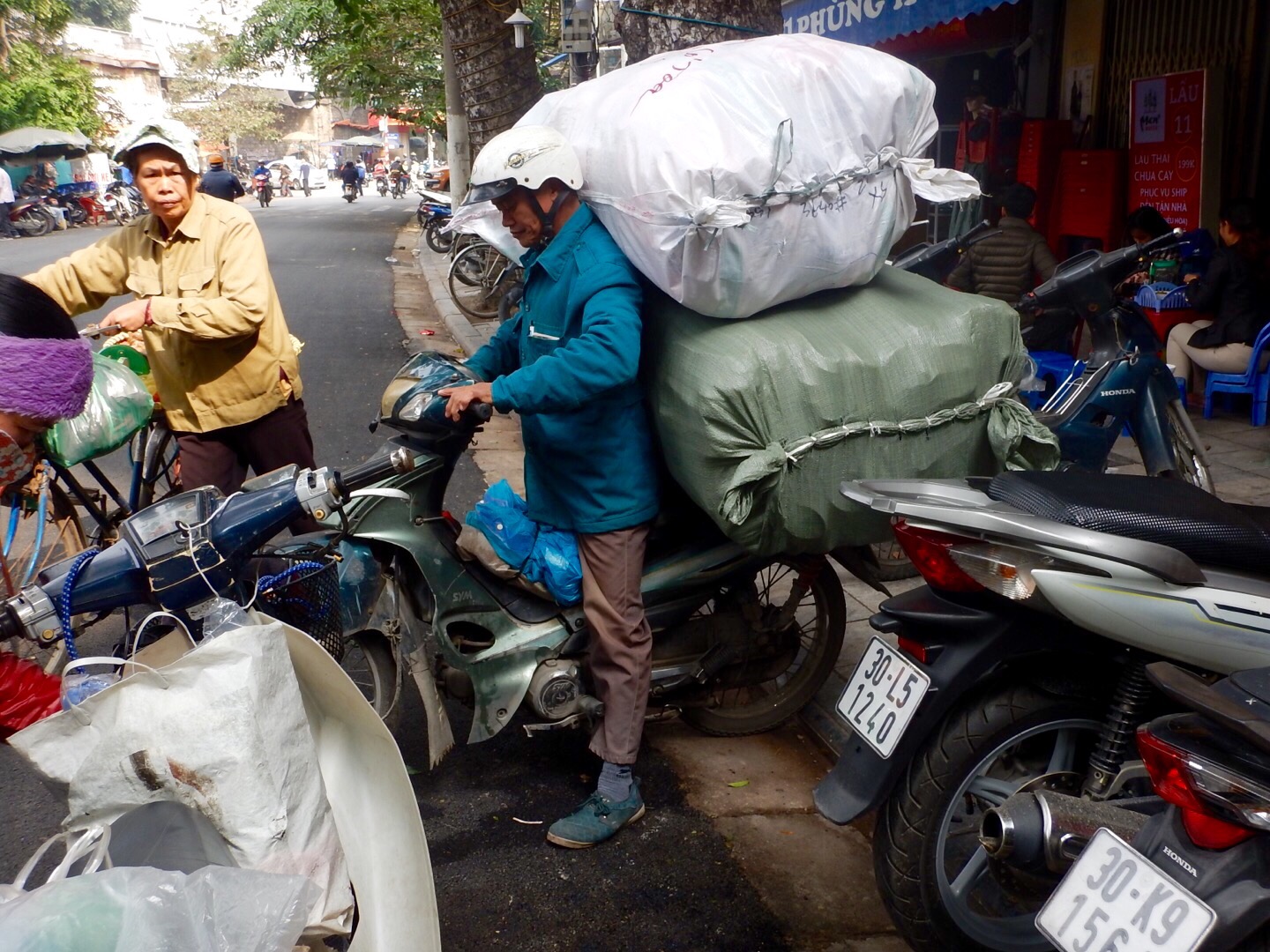 There’s apparently very little that can’t be transported on a motor bike. I’ve seen a family of five on one small bike. Good to see that at least the driver was wearing a helmet. I’ve also seen three slaughtered hogs stacked, spoon-like on the back of a motor bike. 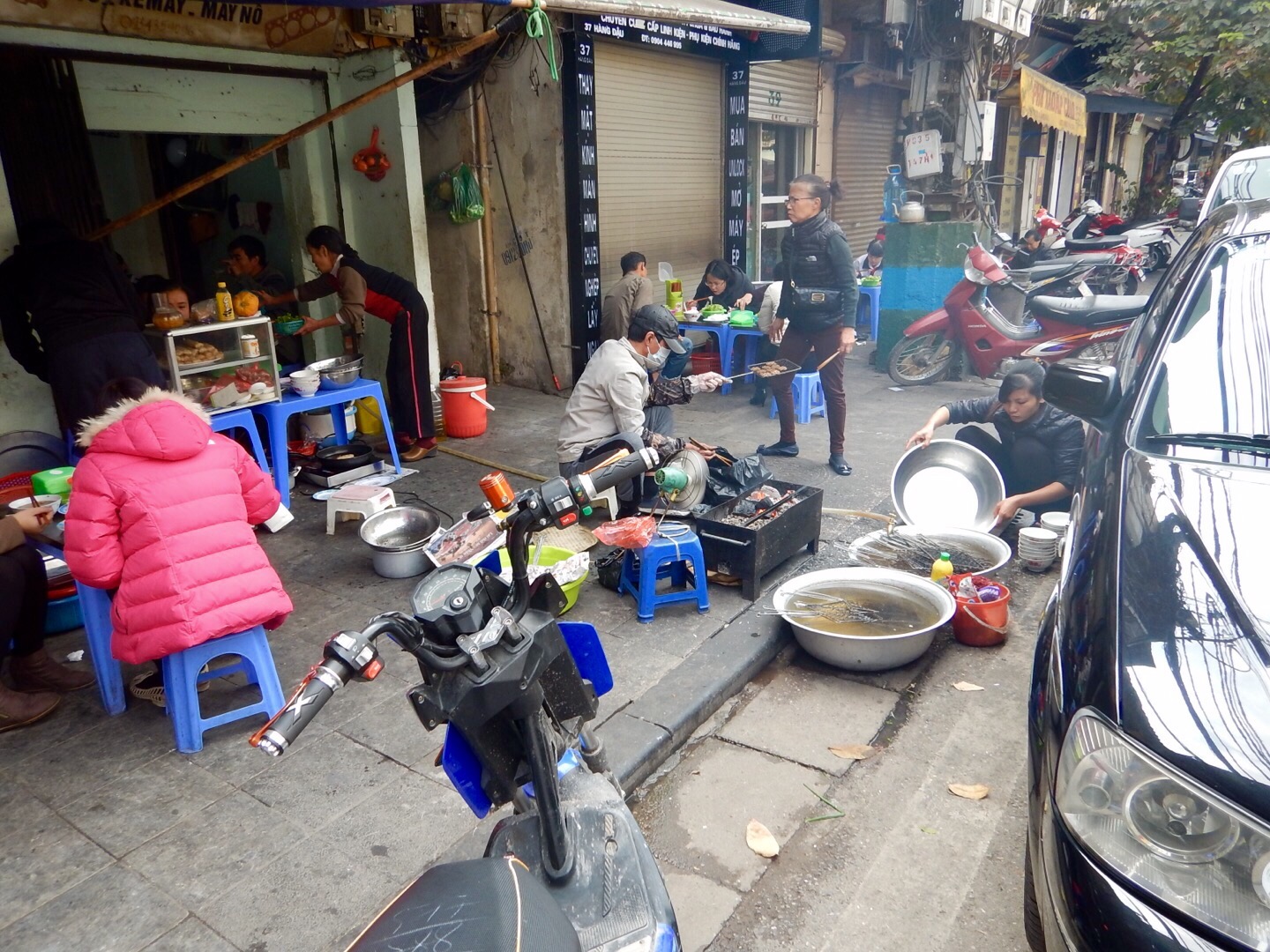 If you have the notion that sidewalks are for pedestrians you are mistaken. Life is lived on the sidewalk of Old Ha Noi. People sleep, bathe, cook, eat and ply their craft on any patch of sidewalk they can find between parked motor bikes. Pedestrians must risk life and limb on the crowded street – no small feat! Traffic lights and crosswalks, if there are any are ignored. Any space is fair game for a vehicle to get through – including the sidewalks – and somehow it seems to work. 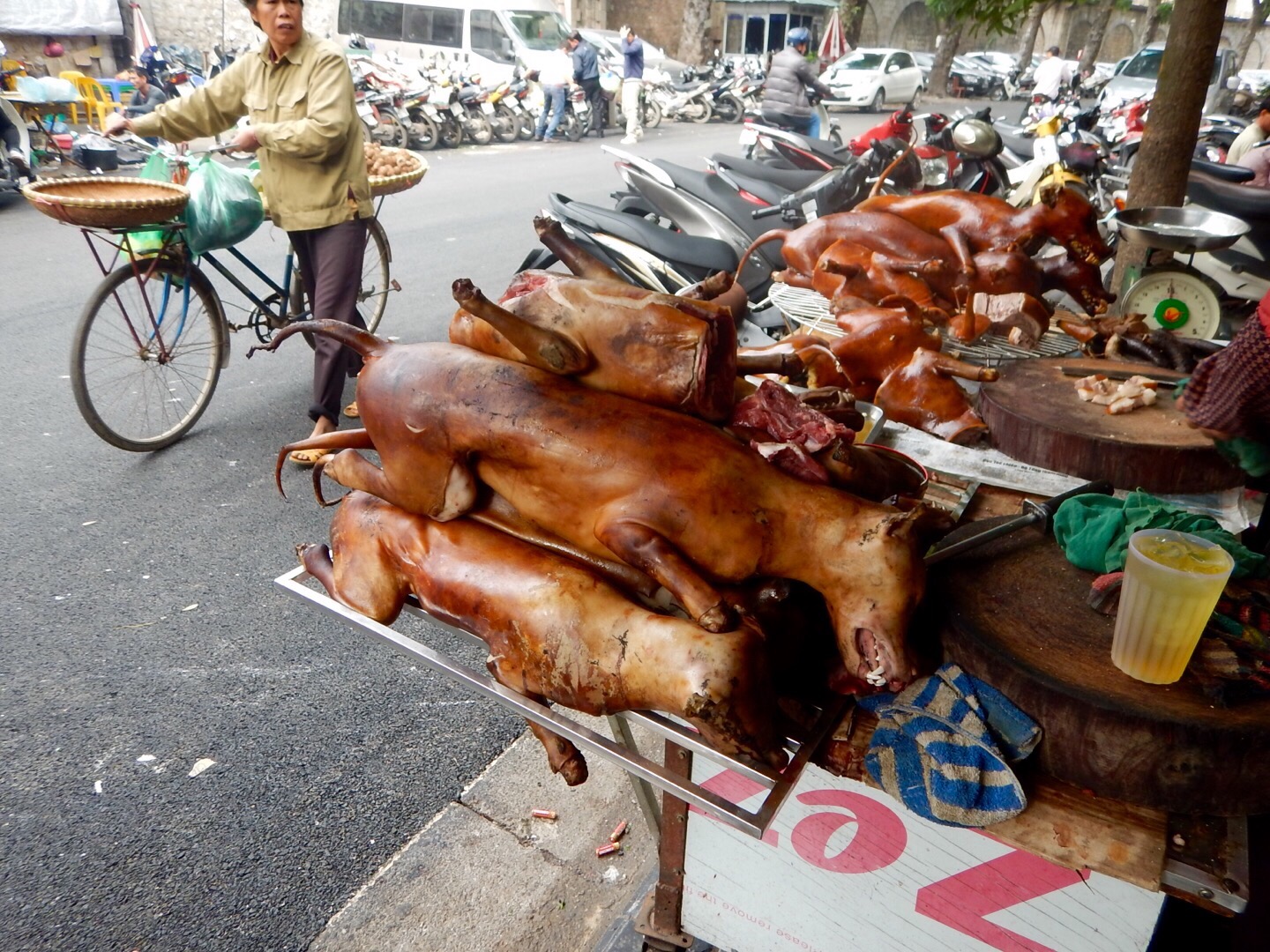 Yes. These are not pigs. 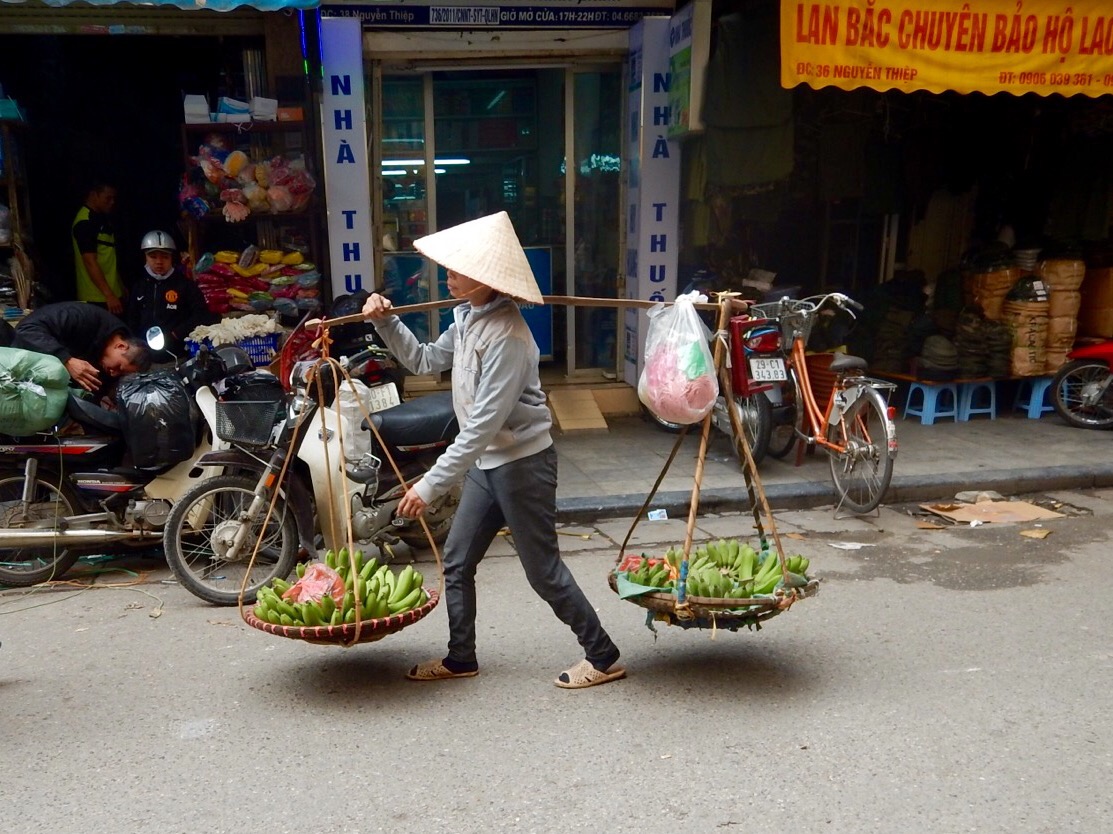 I have tremendous respect for these vendors – usually women – who weave in and out of traffic from early morning to early morning selling everything from peanuts, flowers, donuts, fruit and vegetables to squid cooked on the spot over tiny braziers. Truly amazing.

When I come to any place in Asia I look forward to the food.  In Viet Nam that means the usual fresh, cooked on-the-spot, delicious vegetables, fish, chicken and pork but also sidewalk barbecue and wonderful pho – hot broth with noodles and a myriad of meat and vegetables that seems like it’s different every time.  No recipe here!

I am grateful for the guidance of Ian and Hac when it comes time to eat.  They know which ones out of miles of sidewalk stalls make the best of everything.  Meals in the Old Quarter are generally eaten on the sidewalk, on little plastic footstools.  They say the lower the stool – the better the food.  So I pushed my skiers knees to the max and squatted with the best of them.  It was worth it! 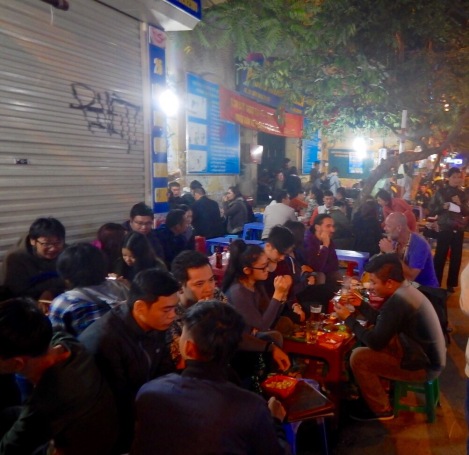 This amazing kitchen is every bit as efficient as any high end restaurant and probably feeds more customers. too.

Very glad that my hosts, Ian and Hac introduced me to this famous intersection. Known as Bia Hoy (which might be Viet Namese for 25 cent beer!) these local watering holes expand as the evening wears on. Proprietors add rows of tables and stools until the streets are completely closed off. The overhead camera is a recent addition, put in by officials who now know when to come ticket the sellers and clear the streets. Spoil sports.

The Old Quarter comes even more alive at night, if you can believe that.  It must be the combination of cheap beer and very good food.  I found it more challenging to avoid the traffic at night as a pedestrian so I paid  200,000 dong – about $12 – for an hour tour by cyclo.  These bicycle-powered rickshaws are everywhere and they’re a great way to see the city while sparing a little wear and tear on your heart!  I still had weak moments as my driver peddled me blithely across innumerable lanes of oncoming cars in giant traffic circles – all honking wildly.  But I survived.

This part of Ha Noi is organized entirely logically by goods.  So all the clothing sellers are in one area, shoes in another, kitchen goods in another, and all the spice vendors are in one seriously fragrant section.  So you don’t have to drive across town twice to find a part for your cyclo, as all the parts sellers are in the same street.  What a great system. Entirely practical. 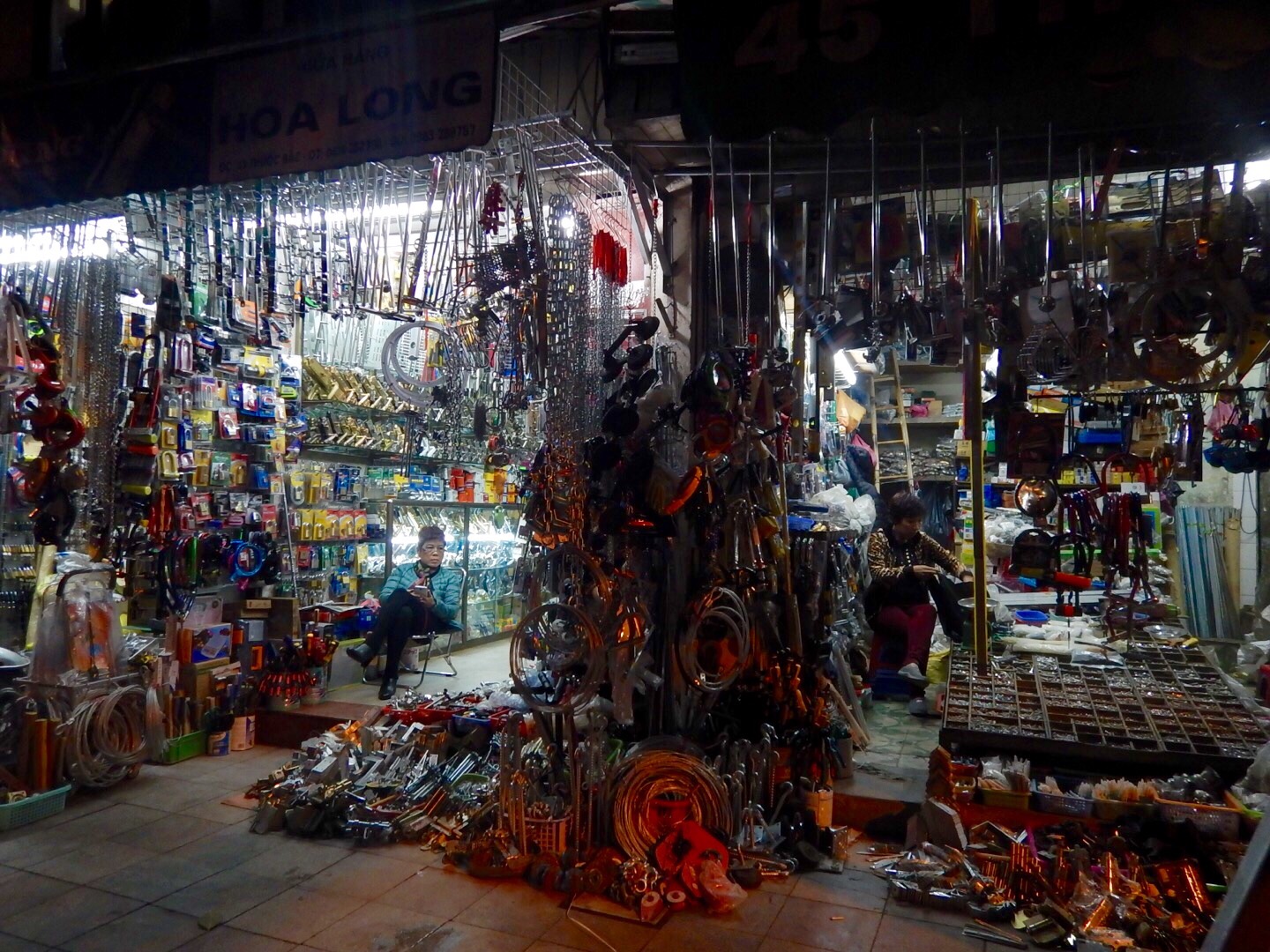 A shop in the hardware district.

There’s a large district at this time of year selling Christmas gear including stalls selling only Santa suits, only fake trees and only tree lights. This stall specialises in Christmas bells!