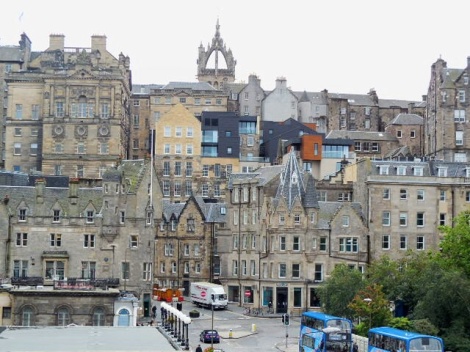 That favorite question keeps coming up, “Of all the places you’ve been, which is your favorite?” And it still elicits my favorite response “It’s the place I haven’t been to yet”. But quite possibly one of my favorite travel moments so far was sitting on an Edinburgh city bus and looking up as we came around the corner to see this spectacular sight. It took my breath away. This is Old Edinburgh, a UNESCO World Heritage Site. 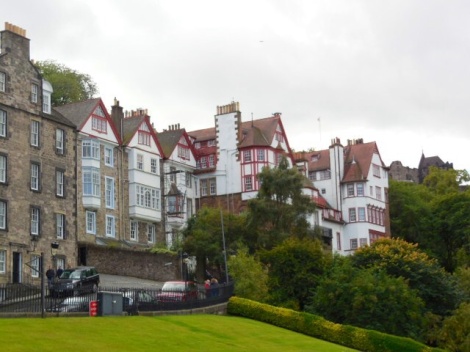 Old Edinburgh includes the descriptively named neighborhoods of Haymarket and Lawnmarket. Haymarket is somewhat obvious but Lawnmarket, with not a blade of grass in sight had us puzzled. It’s named for the linens, laces and fine lawn goods that were sold there in earlier times. The Royal Mile runs along the center of Old Edinburgh and that name came about because it joins Edinburgh Castle at one end and the Queen’s Scottish palace, Holyrood at the other with the spectacular St Gile’s Cathedral about in the middle. The Mile is a broad pedestrian mall lined with pubs, shops and restaurants – not to mention some interesting people.

We wandered this strip many times. I was particularly intrigued with the tiny alleys that run off the Mile. I could just imagine the goings on in some of these secreted doorways on a dark and stormy night and I’m sure some of these titles are descriptive. 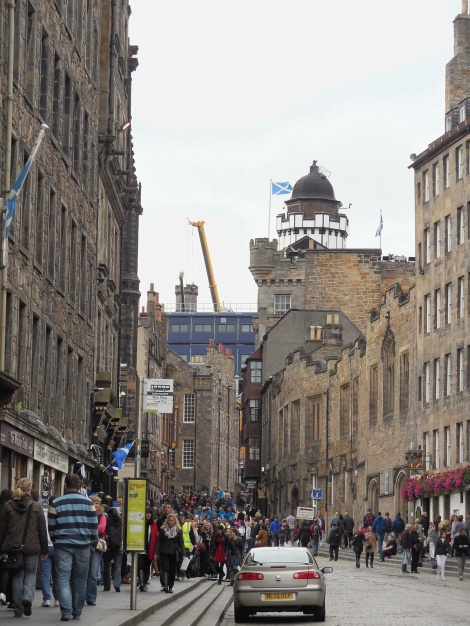 Edinburgh Castle sits high atop an extinct volcano at one end of the Royal Mile. It can be seen from just about anywhere in Edinburgh. They had just finished the Scottish Military Tattoo, a spectacular display of Scots heritage held in the forecourt of the castle, so the stands and cranes were being removed when we visited. This castle has been the seat of power in Scotland for centuries, occasionally occupied by ‘the English’ and in both world wars used to retain prisoners of war. Now it’s no longer occupied at all except by tourists, a small detachment if constabulary and wedding parties. A tour guide told us that Hitler ordered Edinburgh Castle to be spared during the Battle of Britain as he intended to use it as a residence once he’d won the war. 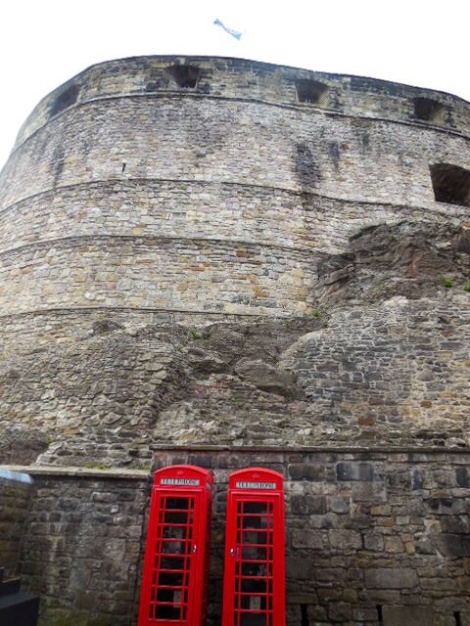 St. Giles Cathedral, or the High Kirk of Scotland is the spiritual mainstay of the presbyterian Church of Scotland. The organ, while not the oldest I’ve seen by far, is one of the most spectacular. It was built in 1992.

The exquisite Thistle Chapel off the quire of St. Giles is where the Queen anoints Scots who have made a significant contribution in the UK and internationally as Knights and Ladies of the Thistle – an order that has been around since the Middle Ages. The tall stalls around the walls of the chapel were each assigned to a Knight of the Thistle.

We had a somewhat surreal visit to the Queen’s palace, Holyrood. At the same time that we were admiring the architecture of the place and wandering through the ruins of the old Abbey, there was a very noisy rally going on at the top of the hill above Holyrood – Arthur’s Seat – exhorting Scots to vote for independence in a referendum to be held in 2014. So although it was a quite civilized affair I thought I might have made out faint chants of “Death to the English!” and the clanging of scythes and pitchforks as the rabble came clamoring at the huge wooden gates of Holyrood. 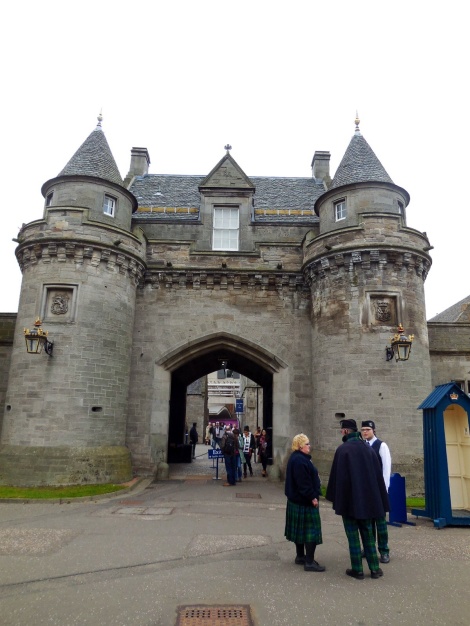 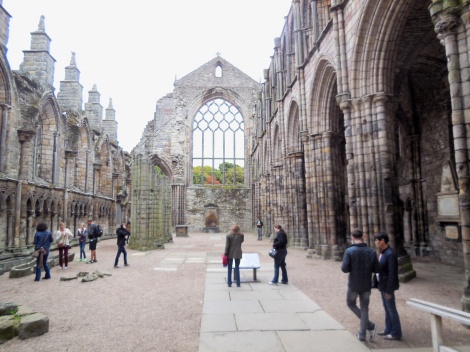 When she is in Edinburgh the Queen attends church at this modest spot along the Royal Mile. You can tell this is her church by the royal insignia over the doorway.

The small graveyard on the grounds of the church contains this poignant and poetic tribute to the poet Robert Fergusson from his friend, Robert Louis Stevenson “A gift from one Edinburgh lad to another”.

The famous economist and author, Adam Smith is another Edinburgh lad. He penned The Wealth of Nations, that Holy Grail of free market economists. He is also buried in this church yard. I searched for a long time to find a grave marker but in the end all I found was this small bronze icon worked into the cobblestone drive in front of the church.

In complete contrast to the spectacular and ornate period buildings that line the Royal Mile, Edinburgh’s very controversial new Parliament Building sits almost across the street from Holyrood palace. Interesting choice of location, that. It’s definitely an interesting building and I’m sure its…um…unique architectural features have great significance. The most appealing part of the place to me is the wall of quotes by famous Scots that borders one side of the building. The high green hill in the background with the distinctive shape at the right side is known as Arthur’s Seat. The origin of the name is uncertain but it may harken back to King Arthur. It’s also part of a volcanic ring that forms the hills around Edinburgh.

We are of next to the Scottish Highlands to find some hairy coos. Stay tuned!