My standard answer to the question “Would you like to go to (fill in the blank)?” is almost always an enthusiastic “Yes!” especially if it’s to someplace I’ve never been before. And that’s how I found myself in the Philippines accompanying my son on a three-day business trip.

There are over 7,000 islands comprising the Philippines, which might explain why so many sailors are from there. It has the 11th or 12th highest population in the world with over 95 million people in a country whose land mass is about the size of Italy, which might explain why so many Filipino’s emigrate to other countries. Catholicism is the predominant religion in the Philippines and I guess they take it very seriously as it’s the first time I’ve ever heard a ‘God bless you’ included in the welcome from the flight deck en route to Manila. I’m never entirely comfortable dangling in mid-air some 35,000 feet from solid ground, so I found the addition of a blessing to the usual routine a bit unnerving.

We arrived in Manila, the capital city of the Philippines, at night into a maze of neon lights, humidity and seriously congested traffic so my first impressions were somewhat benign. That changed the next morning though when I made the short but hazardous stroll along crumbling sidewalks to a nearby Starbucks and issued my first ‘Good morning!’ of the day to the seriously armed security guard at the door. This would be an overarching theme of our few days here – armed security guards and airport-style scanners at the entrances to everything from coffee shops and restaurants, to shopping malls and movie theaters. Some places even have repositories for parking your arms on the way in. I found it all quite unsettling and wondered if this is what the future will look like in other countries with little or no gun control. Not mentioning any names.

We were here at the end of December and as New Year’s Eve approached the big issue in the morning newspaper was how to prevent police officers from firing off their guns to ring in the new year – a tradition that routinely results in injury to innocent revelers, the constabulary usually being somewhat inebriated by midnight. This year the Chief of Police had devised a quite remarkable solution. The muzzle of every official weapon would be taped over with a tape signed by the Chief, so it would be obvious the next morning if it had been fired and ‘appropriate action’ would be taken. True story. You can read about it here.

This is Manila Bay from our hotel – taken through dirty windows and smog. It’s considered to be one of the best natural harbors in the world. The fabled island of Corregidor, where General Douglas MacArthur was routed by Japanese forces in WWII is just a couple of miles in the distance. He left behind some 90,000 US and allied troops with the words “I shall return!” So Arnold wasn’t the first person to coin the phrase. 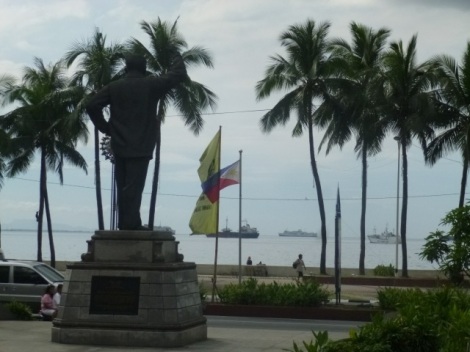 The fortress at the north end of the bay is, I think the US embassy or the HQ for US forces in the Philippines. The folks in the water are not actually having a morning swim, but a morning bath for squatters along the bay.

There are some interesting transportation options in Manila. These colourful jeepneys have become symbolic of the country. They were originally built from US military jeeps leftover after WWII. The name comes from the combination of ‘jeep’ and ‘jitney’.

Or you can haggle with the driver over the fare to ride in one of these. 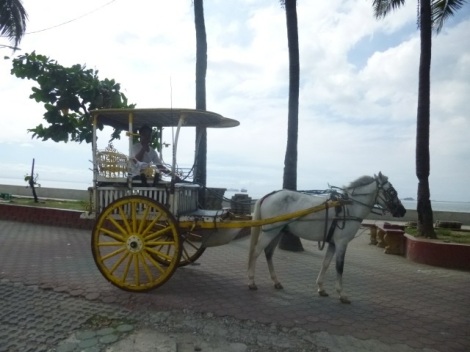 The Intramuros – or walled city – is the historic core of Manila and is, quite literally an area about a quarter of a mile square protected behind massive stone walls that were built by the Spanish colonial government in the 1600’s to defend the city from invaders. This historic site is considered endangered by the Global Heritage Fund, at risk of disappearing completely due to mismanagement and pressures for development. We chose to tour the Intramuros by cozy pedi-cab. 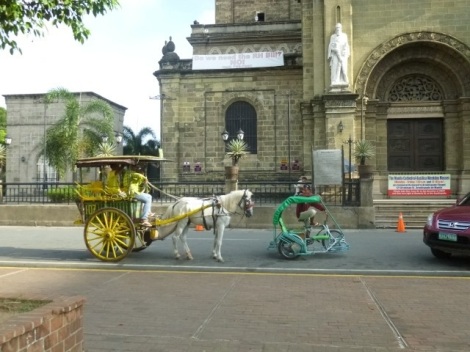 San Augustin Church in the Intramuros is one of the oldest buildings in Manila, built in the 1500’s. A wedding was taking place as we toured the church.

I never miss an opportunity to see a pipe organ – a technology that I fear might disappear some day along with the craftspeople who build and maintain them. It’s a labor of love. I took a lot of music courses in high school and my music teacher was something of a mentor. He took a group of us one day to visit his father, who was building a pipe organ…in his house! If you are familiar with pipe organs this will seem as amazing to you as it still is to me. It seems that every room in the house had its own range of pipes. The big pipes that carry bass notes wound up the stairs in the two-story home. I can’t help wondering whether a pipe organ would add or detract to the re-sale value of a home? This gorgeous organ was built in the 1800’s and restored in 1998.

The walled city centers around Fort Santiago, the original fortification of Manila built between 1590 and 1593 of volcanic ‘tuff’. Well, when life gives you volcanoes…. This fort was taken over by the Japanese in WWII and used for prisoners of war. Hundreds of prisoners we killed here toward the end of the war in what became known as the Manila Massacre, and it was here that the Philippine national hero, Jose Rizal was executed in 1896. The footprints painted on the path eerily re-trace Rizal’s final steps as he was led to his execution. 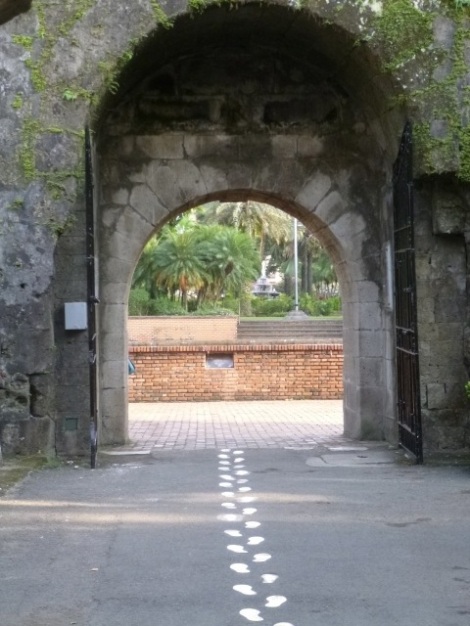 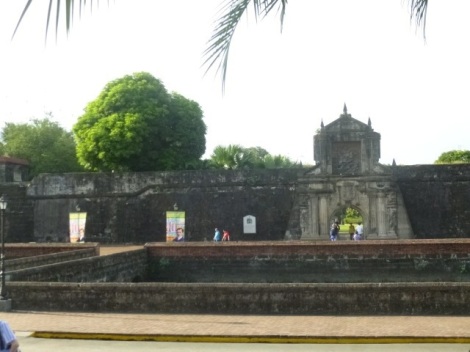 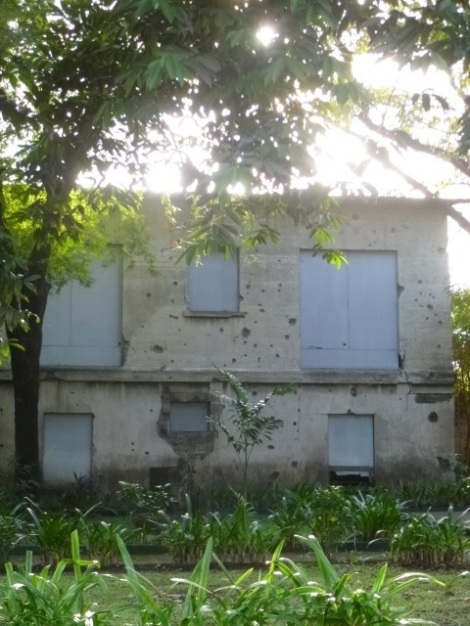 General Douglas MacArthur is revered throughout the South Pacific as leader of the US Army in the Pacific through WWII, but he is especially important in the Philippines where he was also Field Marshall of the Philippine Forces. Here he is enjoying his trademark cob pipe and some pithy conversation with then Philippine President Quezon and another friend.

The Pasig River, a major waterway through Manila, runs just below Fort Santiago and sadly appears to be a convenient spot for dumping garbage. 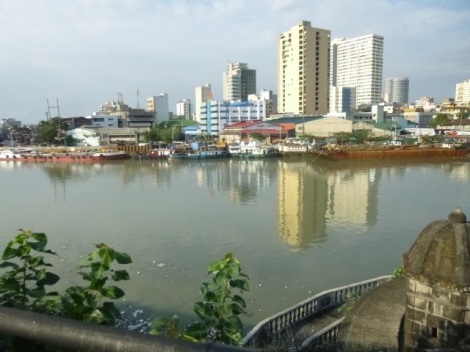 This couple of days was a very small taste of the Philippines, just a few kilometers of one island, so there are still 6,999 more islands to see. I was sorry not to have time to try out Manila’s descriptively named Whack Whack Golf Course but a person can only do so much. Maybe next time. Stay tuned!