There are 17,508 islands in the archipelago of Indonesia and it might come as a surprise to learn that it’s the fourth most populated country in the world, at almost 240M people. I confess that most of my earliest impressions of Bali come from bellowing out the songs of Rogers and Hammerstein’s romantic musical South Pacific as a kid. But this is also a country that since those halcyon days has endured thirty-one years of brutally suppressive dictatorship under Suharto, as illustrated in the great film The Year of Living Dangerously. More recently Indonesia was in the news for the bombing of a Bali nightclub in 2002 by Islamist extremists, and again when the 2003 tsunami wiped out much of their northern coastline. But impressions of Bali as a tropical Shangri-la seem to endure. When I ask fellow travelers “If you could go back to one place – and only one place – where would that be?”  More often than not, it’s Bali.  So it seems like a good choice for somewhere to spend a little time recovering from the separation anxiety of leaving Australia and New Zealand.

I’ve planned a couple of days at Sanur, a resort strip not far from the airport at Denpasar, on a beautiful stretch of beach. Bali was colonized by the Dutch in 1906 and then occupied by the Japanese in World War II, and in both instances the initial landings were made at this beach. It’s hard to imagine that today.

The Puri Santrian turned out to be another excellent hotel choice plucked from online travel websites. It’s a sprawling property of low, traditional style bungalows and lush gardens. The grounds are so spacious, and the rows of bungalows are so spread out and nestled in vegetation that I hardly ever saw another person. 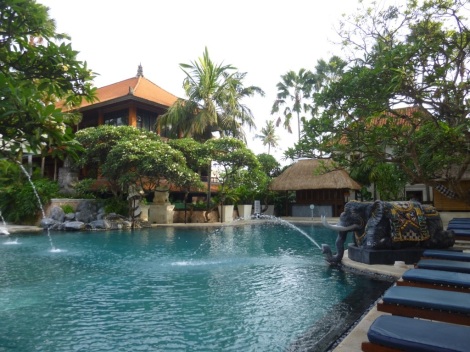 My behavior was completely hedonistic for these few days. I hardly ventured from the resort, opting instead to give in to my lethargy by drifting from a sun bed on the beach to the poolside bar, and strolling the lovely garden paths that all happily seemed to lead to the exquisite Puri Santrian spa. Nothing is more restorative than an aroma therapy massage with all the trimmings. 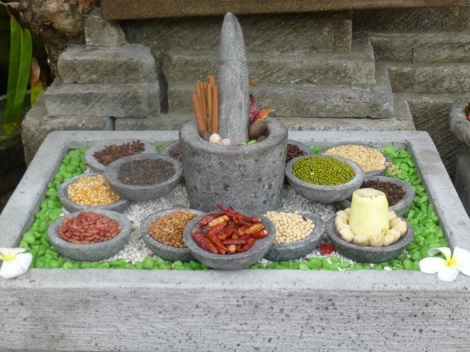 Time does seem to slow down here and I love this simple illustration. The tools of the trade for the manicurists include delicate paper fans.  It was absolutely impressive to see my attendant sit oh-so-patiently fanning my nails dry after the final coat…for ten minutes!  Much nicer than shoving your fingers under nuclear blue heat lights or waving them impatiently in front of dust-laden circular fans. 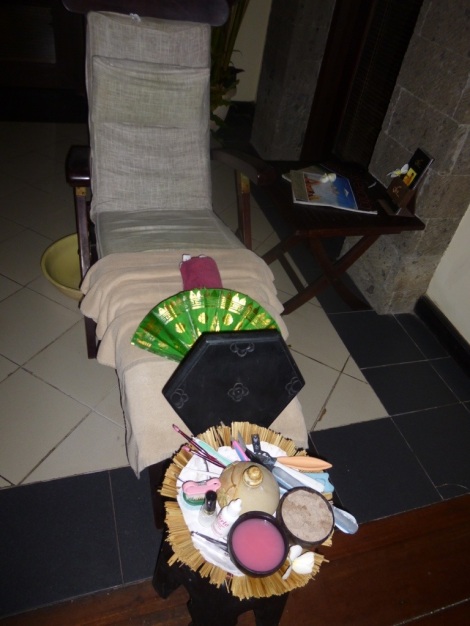 I was curious about this group of emotional gents at the resort so I asked a number of staff about the story behind this. There has to be one but no one I talked to knows it. Care to suggest a caption? 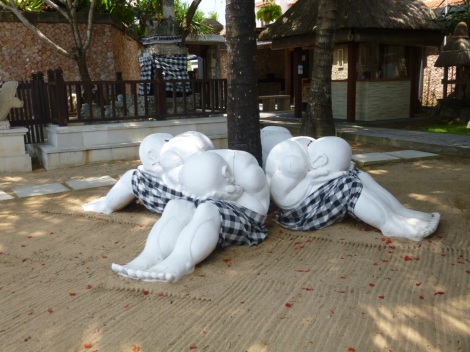 This inviting path stretches along Sanur Beach for a couple of kilometers. It makes a lovely walk or you can avoid the tourist-stalking vendors by picking up a bicycle from most of the resorts along the path.

My little bungalow was delightful and I reveled in the luxury of a full-sized bathtub, after having had only a shower for the last two weeks onboard a cruise ship. I think the mosquito nets are more for effect as I never saw one of the little pests while staying here.  It turns out there’s a reason for that. 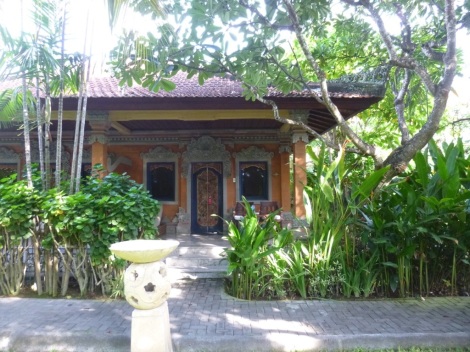 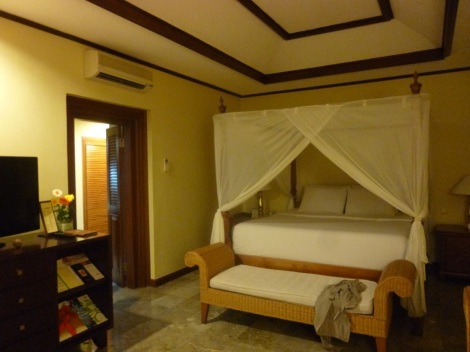 I had just settled into this perfect spot one afternoon – the perfect place to listen to the birds, and let the tinkle of running water in the nearby pools inspire me while I sipped a martini and updated my blog…

…until the peace was unceremoniously shattered by what I thought was one of those ought-to-be-illegal leaf blowers revving up, but that I found out soon enough was this…. 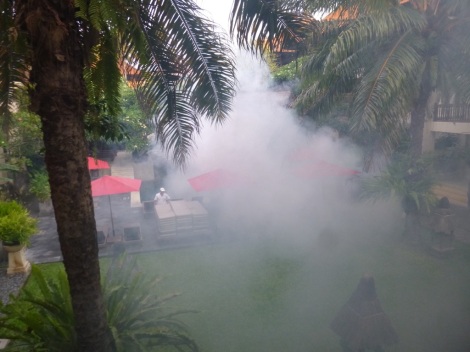 …an employee in a gas mask, with a motorized blower on his back blithely spewing pesticide over the flora, fauna and bystanders.  Before I could make a run for it the cloud of noxious gas billowed up the stairway of the pagoda, literally trapping me and worse, rendering my martini undrinkable. I held my breath until it had almost dissipated and I had almost passed out, then packed up my iPad and headed for the bar at the beach.  I’m probably none-the-worse for the experience except I’m sure I can feel a little tickle at the back of my sinus…right…there.

The majority of Indonesians are Muslim but the population of Bali represents almost all of Indonesia’s second largest demographic. Close to ninety-five percent of Balinese are Hindu, as illustrated in some of the ornate statuary, tucked into almost every nook and cranny, that adds much to Bali’s charm. Images of the deity, Shiva and the elephant god, Ganesh are common and statues are often draped in checkered cloths, particularly black and white which in the Hindu faith is symbolic of the yin and yang of both good and bad spirits. 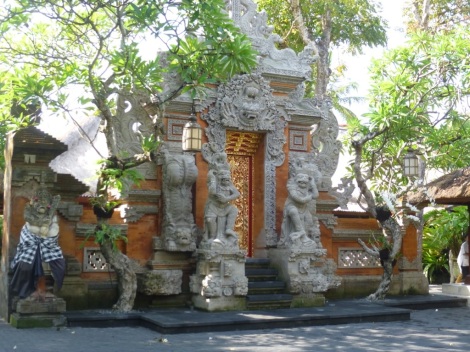 These are junkung along Sanur Beach – traditional single-sail boats that are still used for fishing.

Or you can catch your supper this way. These guys looked like they just hopped off their motorcycles and waded in – helmets, gloves and all.

Families both live in, and earn their living from these shacks along the beach path. At night most of these little places cook up a storm on barbecues that are really just steel drums cut in half, and the beach fills with diners on raised platforms, lounging against colourful cushions while they suck up Bintang or Bali Hai and enjoy the catch of the day under fairy lights and paper lanterns.  The thought occurred to me that Bali seems like an awfully nice place for couples and I can faintly hear the strains of ‘Some Enchanted Evening’ somewhere. 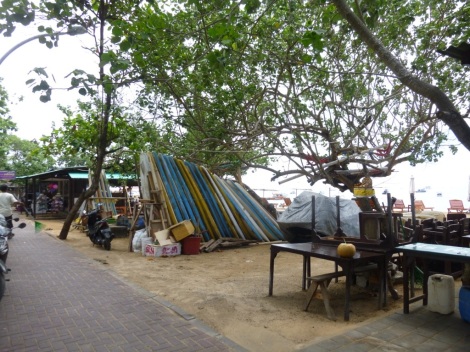 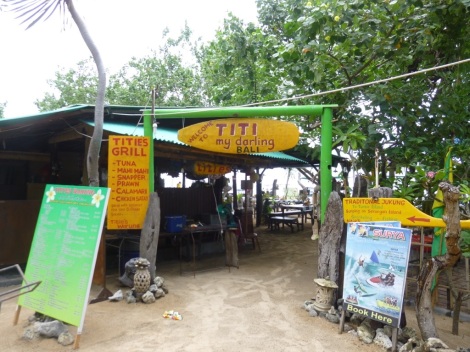 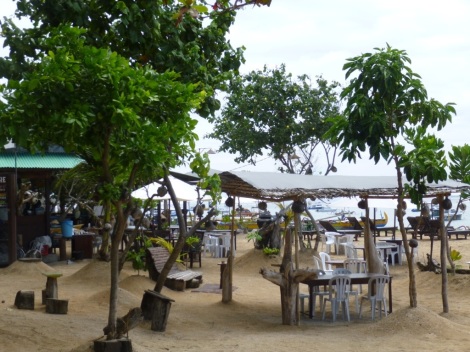 These canang sari are made fresh every day – offerings for good luck that I saw everywhere in Bali.  Most Balinese begin their day  with an offering of food and incense placed at a nearby shrine, and a fresh canang sari placed on the ground at the entrance to their home or business  to attract good fortune.

While mom prepared her wares for the day this serious six-year-old carefully worked through his schoolwork, seemingly oblivious to the traffic along the beach walk. I make it a point to ask permission before taking photos of people and with mom looking on this lad was happy to demonstrate his writing skills for me. 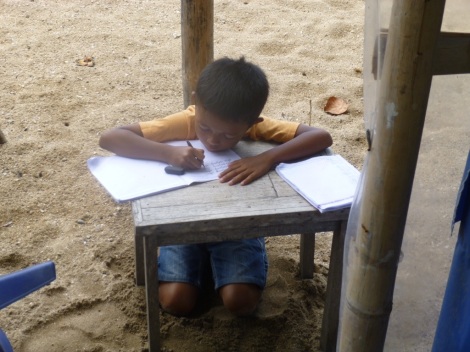 It’s hard to find a flat surface in Bali that hasn’t been embellished in some delightful way. 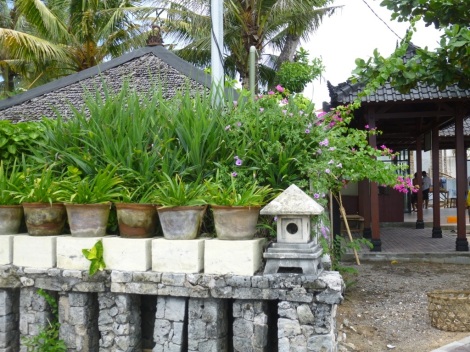 Sanur is one of the original tourist areas of Bali and although traffic just a few hundred yards away on the route into Denpasar is atrocious, Sanur still feels like a quiet village. Walking along the narrow street is something of a challenge, though with narrow sidewalks up steep curbs that are torn up every few yards or so with something that vaguely resembles construction. 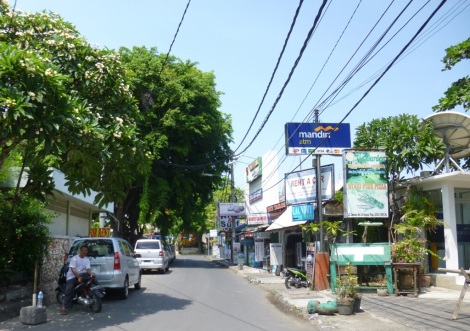 Bali is only eight degrees south of the equator which makes for consistently warm weather, consistently short days – the sun is well down by six PM – and consistently gorgeous sunsets. I took this photo on my last evening in Sanur on my way out to the village for something to eat. I’m slightly chagrined to admit that I opted for an Irish (sort of) pub instead of local food. It turned out to be remarkably entertaining watching a group of local musicians belt out ‘Gypsy Rover’ complete with Irish accents (sort of). 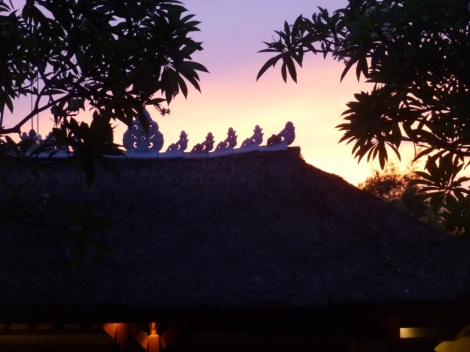 I may never stop missing The Land Down Under but I’m refreshed and restored, feeling almost myself again after my respite on the beach.  I’m off to visit the monkeys at Ubud in the mountains of Bali. Stay tuned!

WAIVER:  In the spirit of full disclosure I feel I should let you know that I’m writing this post from back home in North Vancouver.  I’m THAT far behind on my blog posts because, as usual, I have been too busy having a good time to sit down and write about it.  I still have lots of destinations to add to this adventure, so I hope you do check back.

10 responses to “An Adventurous Broad Abroad – Gone to Bali”