Alice. The object of my desires. I have wanted to visit this place since reading Neville Shute’s “A Town Like Alice” as a teenager. And I have vivid recollections of the film “Walkabout” from the 1970’s that left me with an impression of the Australian Outback that I wanted to experience for myself. I would eventually complete The Ghan route all the way to Adelaide, but a week stopover in Alice Springs would let me satisfy my curiosity on both counts.

I had worried mildly about being able to endure the heat of the desert here and being able to do all the things I wanted to. Temperatures in the days before I arrived had been as high as forty-two Celsius. But the day I got here it had dropped down almost twenty degrees to a chilling (for Alice) twenty-two so I actually wore a fleece jacket for my first walkabout.

It’s almost the off-season in Alice Springs, as it gets too hot in their approaching summer for many residents to sit it out. Some shops and cafe’s were getting ready to close for the season, giving the place a bit of a deserted feel. But I didn’t mind. There are some wonderful museums and exhibits here that I had to myself most of the time, and the attendants having not much else to do were happy to visit with me. 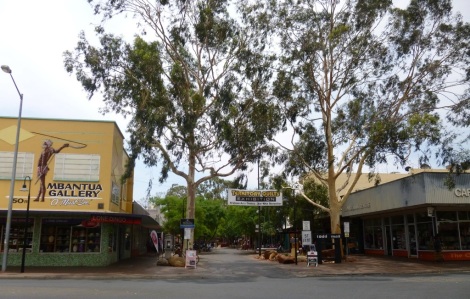 Alice Springs is a sprawling and growing town of about 28,000 people, about twenty percent of whom are Aboriginal. Nestled up against the MacDonnell Ranges, it’s remarkably like the smaller centers in the Okanagan Valley of British Columbia. And although quiet at this time of year, it’s a town that’s booming with couples who want to raise families away from the urban hustle, retirees looking for good weather and a lower cost of living, and artists and entrepreneurs wanting to be someplace small enough to be able to make their mark.

Off Todd Street there are the typical indicators of progress – McDonald’s, Domino’s Pizza, KFC, a ‘Woolies’ or Woolworth’s that seems to be a staple in all northern towns, and there’s even a Target store. There’s not much here anymore that would have suited Crocodile Dundee accept perhaps Bojangle’s Saloon. He would have especially liked the large croc skin hanging over the bar and the skinning knives along the wall. I was kind of taken by the tribute to Meat Loaf. The band, not the dish.

The Todd River runs through Alice Springs. I booked a couple of nights at the end of my time here in a hotel on the river, as I have always loved going to sleep to the soothing sounds of flowing water. This is the Todd River.

To be fair, the signpost identifying the river does include the caveat ‘Usually Dry’ and there is a water level indicator just to reassure you that it really is a river. But only rarely. They say you are not really a resident of Alice Springs until you’ve seen water in the river, which might only happen once in five years.

They hold a regatta here every year called Henley on Todd You can enter for only $15. The boats are carried down the river instead of sailed. It’s been going on for something like fifty-two years and has only had to be cancelled once – because there was water in the river.

I took advantage of the cooler weather to visit the Alice Springs Desert Park only a few minutes out of town, at the northerly tip of the MacDonnell’s. At the end of their season, the place felt almost closed and I felt very lucky to have it almost all to myself. It had actually rained sometime in the night so much of the desert park was in bloom and just gorgeous. I picked up a headset for the self-guided tour and completely enjoyed the kilometer or so stroll through the various terrains, plants and creatures of the desert. 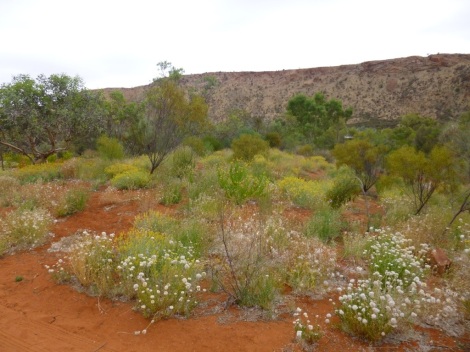 Any depression, or pan in the desert is an opportunity for water to accumulate and for the Aborigine who roamed these deserts for thousands of years their knowledge of every salt or gypsum pan made the difference between life and death.

Each segment of the park has an aviary of the birds endemic to the region. These are kookaburras. 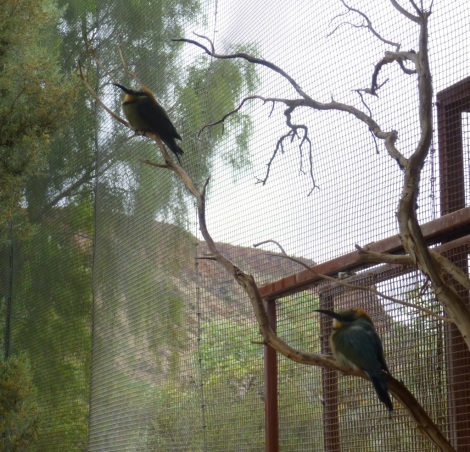 Amazing and adaptive plant life in the desert. I loved learning about spinifex, which is a prolific grass very central to Aboriginal culture and the less desirable, purplish buffel grass that was imported to Australia and now threatens native grasses. 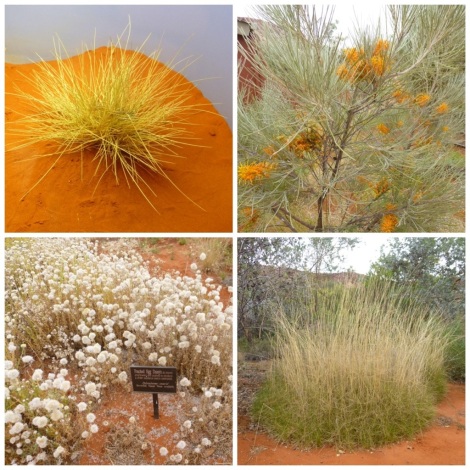 Temperatures returned to normal shortly after my visit to the Desert Park, so for the next couple of days I sought refuge from the searing heat by seeing several of the very good exhibits and museums within walking distance of Todd Mall.

The Royal Flying Doctors Service was established in the fifties to bring life-saving care to the remote towns and stations (ranches) throughout Australia. 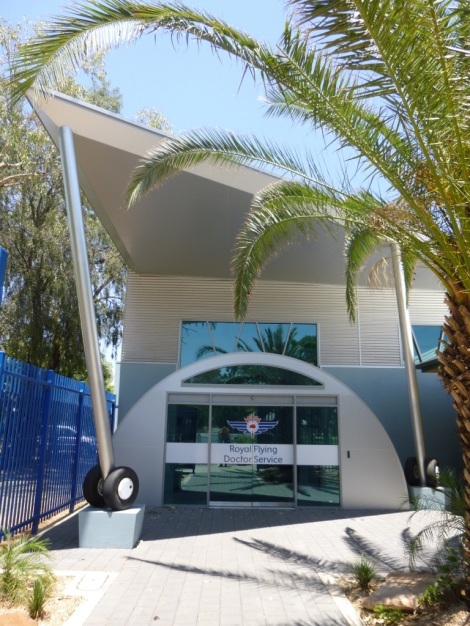 John Flynn, who established the RFDS also had a hand in inventing the first pedal-powered telegraph system – an important tool in places lacking reliable power sources. The operators in this old communications center really had to know what they were doing. Incredible, when you consider the ease of communications today. (Although I should note here that I could not get more than twenty minutes of wifi – per day! – at my Alice Springs hotel.) 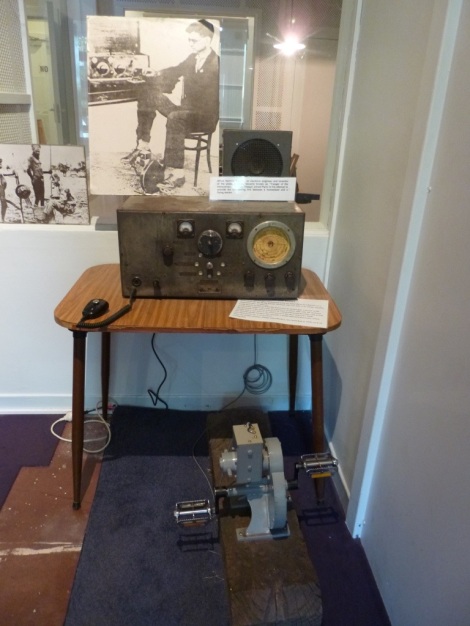 This real-time map shows all of the RFDS flights in the air at any given time. While the service started out as a ‘rescue’ initiative it now provides a much broader range of services that includes preventive medicine, seniors care and transfers, and maternity care.

Adelaide House was the first hospital in Alice Springs. It’s one of the few remaining original buildings in the center of town. It was interesting to see what medical care was like here in those days but a highlight of this visit was having a cup of tea and home made lemon cake with ‘the girls’ – Marie (pronounced Mar-ee with the accent on the Mar) and Lorraine.

All the meals for patients were prepared on this stove. The temperature on the day I was here was in the mid-thirties and I could not imagine, in the days before air-conditioning firing this thing up to boil water or make tea. Those pioneer women must have really been something.

Speaking of pioneer women, I also visited the National Pioneer Women’s Hall of Fame which, in some strange twist of opportunity is located in the old town gaol. There’s certainly a weird symbolism there but I’m on vacation so I’m not going to think about it too much. 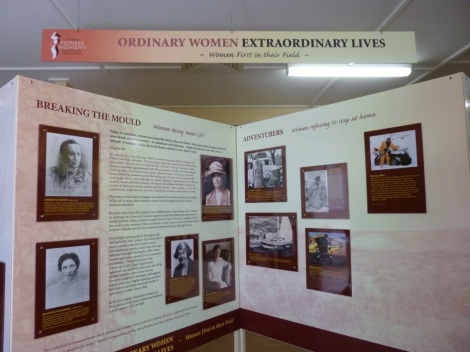 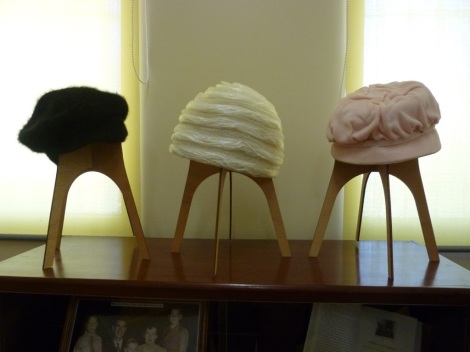 One should never be caught out in the desert without a great hat. Apparently. 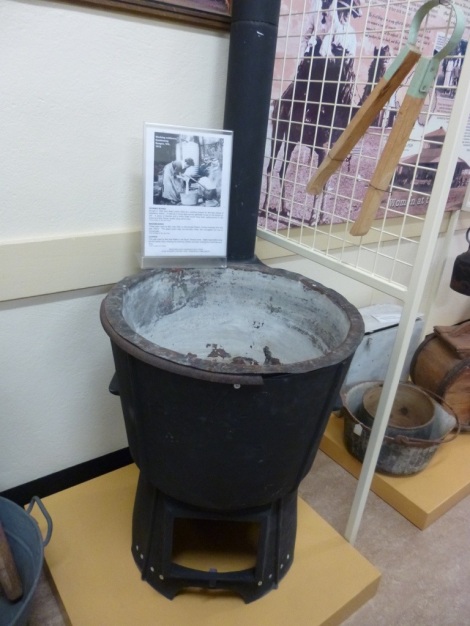 Directly across the street from the Pioneer Women’s Hall of Fame is the Reptile House. I had to pass it to walk back to Todd Street. But I didn’t. 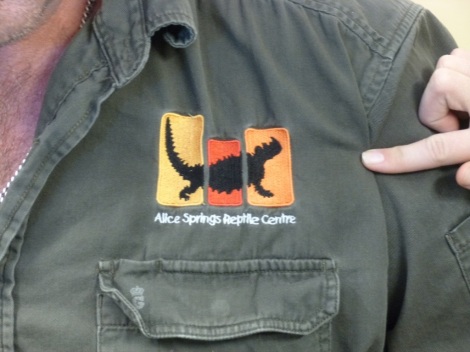 Meet my new friend. I did not think I could do this but decided it was now or never. Okay…I also thought my grandkids would think I was pretty cool. It might look like I’m enjoying this but really I was saying “Take the *&^$*# picture – quick!!!”

The real motivation for stopping in to the Reptile House was so do some reconnaissance work. I would be heading out the next morning for three days of hiking in the Outback and sleeping in the desert under the stars. I wanted to see what I really had to watch out for and it turns out it’s this guy – the descriptively named Western Death Adder. Lovely. 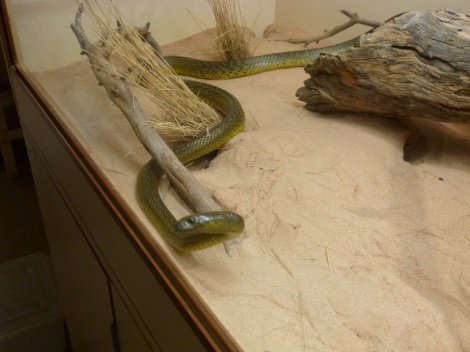 I’d got into the habit here of stopping during the hottest part of the day for a pint at the local watering hole, where one afternoon I met Martin – a local character and member of the Alice Springs Golf Club. He offered to show me the golf course and I was happy to take him up on it. It was too late and too hot to golf but I was able to hit a couple of balls as we drove around the course. I was especially pleased to have hit a fine ball from the men’s raised tee box on the third hole. It was a grand shot, straight down the fairway that landed only ten feet short of the green. In the bunker. 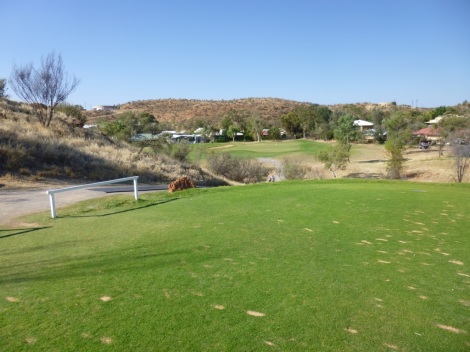 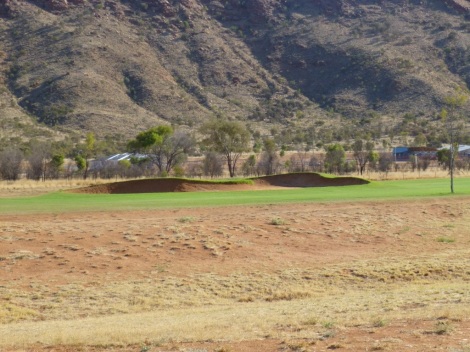 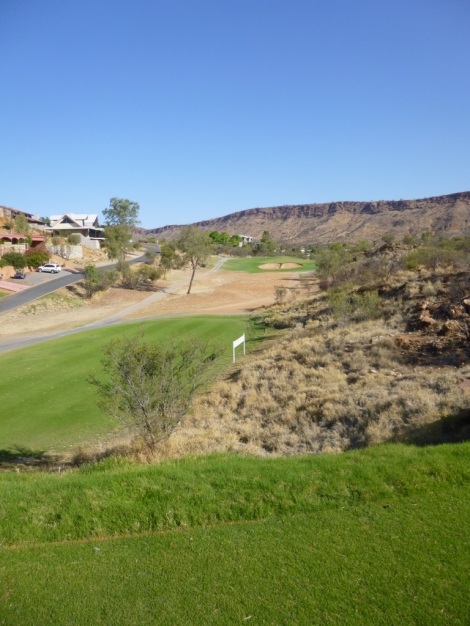 When life gives you sand….make bunkers. 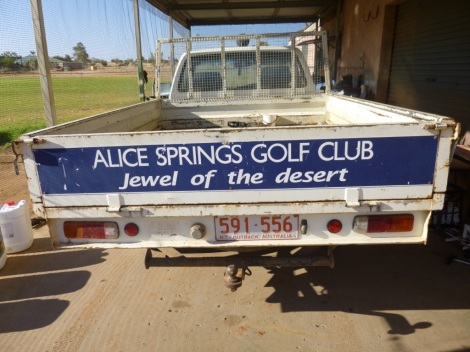 After our tour of the course I had fish and chips at the golf club with Martin and his family. It was Bingo Night! – a fundraiser for their junior golf program so we played a couple of cards. It was a real family affair and gave me a sense of what a tight community this is. Interesting to learn that there is no minimum age to golf this course. Kids as young as four go out with their parents. Not like Vancouver where you have to be twelve to golf a public course. These folks know how to get the next generation hooked early.

There’s a fabulous arts culture in Alice Springs. I was given a tour of a gallery of gorgeous Aboriginal paintings, and I was invited by my B + B host to attend an art exhibit opening. Those will be the subject of a separate post. Stay tuned.

2 responses to “An Adventurous Broad Abroad – A Town Like Alice”