If the most descriptive term that comes to mind for Singapore is ‘big’ then in Darwin it’s definitely ‘small’. They like to point out in Darwin that they are the only state capital that isn’t a city. It’s a town and a pretty small one at that. But ‘no worries’! I’m tickled to be in Australia in whatever form that takes. Bring it! 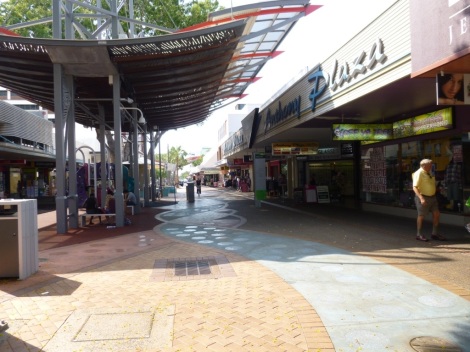 I bet you didn’t know that the city of Darwin was completely wiped out by Cyclone Tracy in 1974. Completely. The entire town was on federal land at the time and so the army totally evacuated everyone and lickety-split completely rebuilt Darwin. So there is very little here older than 1974. The odd things is that there seems to be very little here that’s newer than 1974 either. Being in Darwin feels like a trip back in time. The ‘downtown’ area – a few blocks of Mitchell Street – is very much like the neighborhood where I grew up in the 60’s. There are no American franchises or food chains, no Walmart, McDonalds or Starbucks and that alone gives the place a unique feel. Mitchell Street Mall is a lovely stroll past independently owned cafe’s, bookstores, jewelery and shoe stores, interspersed with tour companies and the odd attraction – including one where you can go underwater with crocodiles in a plexiglass box. You’re in the box – not the crocodiles. I gave it a pass.

It took less than an hour to see downtown Darwin and happily that left the afternoon of my first day there to visit the remarkably good Museum and Art Gallery of the Northern Territory. They have a fabulous exhibit of Cyclone Tracy with before-and-after aerial photos, remnants of buildings and belongings, videos and even a sound room where you can stand in total darkness and hear an actual recording of the cyclone as it hit. Quite unnerving actually. There is also a gorgeous display of indigenous art, a small airplane hangar of vintage watercraft – mostly working vessels and canoes – and a significant exhibit on the natural history of the area. Photos are strictly forbidden so you’ll have to take my word for it, but it was an afternoon very well spent and I highly recommend it if you are in the neighborhood.

I stayed at a B & B in Darwin and enjoyed my brief visit with the owners, Janette and Roger. They, however buggered off to Bali the day after I arrived and so for the most part I had their lovely home entirely to myself. And that included their lovely pool. I had a swim here every day. It was around 40 degrees for my few days in Darwin so the salt water pool was almost hot.

Host, Janette Steele demonstrating how to get the fruit out of a jack fruit.

My second day at the Top End was spent touring the immense and staggeringly beautiful Kakadu National Park. ‘Kakadu’ doesn’t mean anything. The name came about when an early colonizer mis-pronounced the Aborigine word ‘gagudju’, which is actually a ‘skin name’ that sort of denotes lineage in the Aboriginal culture. Unfortunately the bastardization stuck. It doesn’t matter. There are not enough superlatives in any language to describe this experience so I hope these photos capture some of it.

Our first stop en route to Kakadu was at The Barking Hut. We had coffee and home made muffins but there were encouraging signs that the more typical fare here was something more potent.

These emergency phones are in many places throughout the park. Just in case you forget that you are in a dangerous place.

The rock paintings at Nourlangie Rock are not just beautiful and very old. Aboriginals have occupied this land for more than sixty thousand years in much the same way they do today. These paintings contain important information for nomadic Aboriginals traveling through the area. This painting tells visitors that wallaby are here and that the best time to hunt them is in the morning or the evening. They would know this by the position of the sun to the animal – low in the sky.

This painting depicts some of the activities of the Aboriginals in the area but, more importantly can you see the stick figure in the upper left corner with the balls at each joint? This tells newcomers to the area that this land will make you sick. The balls denote swelling of the joints. The area is, indeed full of metals like uranium and arsenic that can cause arthritis and other ailments. 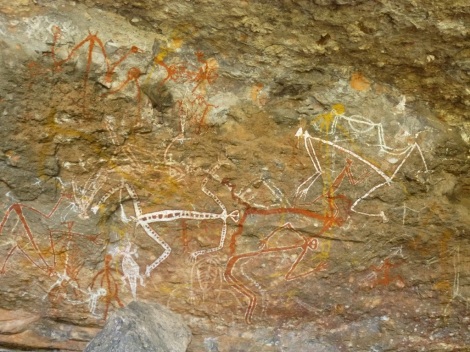 This painting of an Aboriginal celebration features the lightning god, Namanjolg. You know it’s a celebration by the head dresses and gowns worn by the women. 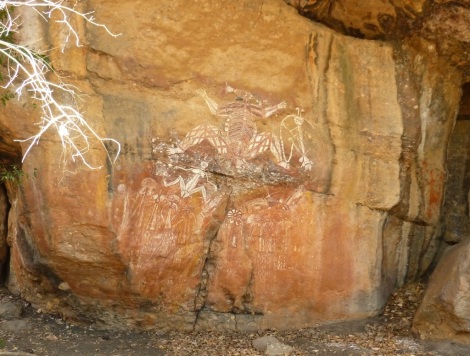 Aboriginal laws are based on ‘kinship’ which suggests something like family is of utmost importance and fidelity also critical. Aboriginal lore says that the lightning god, Namajolg broke the kinship laws by incest with his sister. A feather was plucked from his head dress and put here for all to see their remorse. The feather is the small boulder on the edge of this high cliff.

Our day in Kakadu included a boat tour of the Yellow Waters where we encountered several of these guys. On the way out we passed a small boat that was bringing a woman for medical care who had been bitten – apparently not too seriously – by a crocodile.

A word about crocodiles here. Although there are at least two “Alligator River”s in the Northern Territory there are no alligators anywhere in Australia. None. The rivers were apparently named by a colonist who was unable to discern the difference. So if you see anything that looks like this in Australia, it’s a crocodile. Period.

I was charmed by these tiny birds, no bigger than an egg but with long legs and spidery feet that let them run along the lily pads with ease. 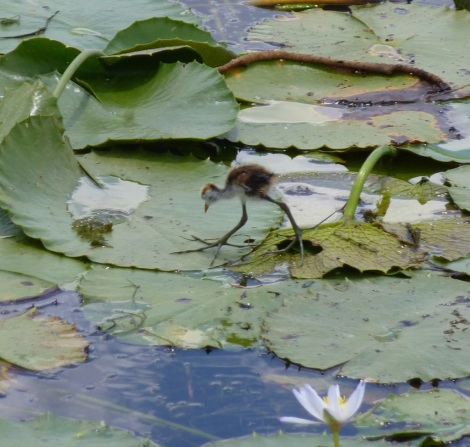 Wild horses still range through large parts of Australia, descendants of working horses abandoned to fend for themselves in days gone by. 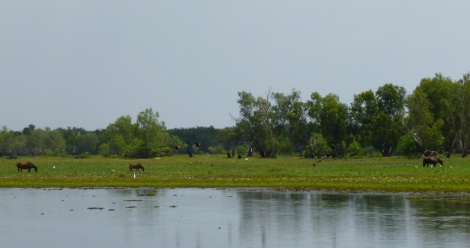 This is a data bird. These remarkable birds spend much of their time underwater fishing for food. You will see their long, graceful necks pop up from underwater now and then but every once in a while they have to come up and dry off their wings to maintain buoyancy. 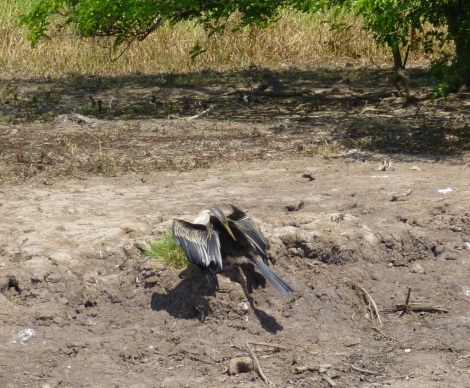 I felt like I was in a David Attenborough special on this river tour. The vista as we came around every bend just took my breath away.

After the river cruise, rather than climb back on a very large tour bus for an hour drive to Jabiru, I opted to climb into a very small airplane (also very hot) for an aerial view of Kakadu. If you have ever seen the scene in ‘Out of Africa’ where Robert Redford flies Meryl Streep over the Rift Valley in a bi-plane…well, you will know how this felt to me. Without Robert Redford.

All of Kakadu National Park is owned by the Aborigine community – given back by the Australian government not that long ago. The park is administered by a Board of twenty, of which the majority are ‘owners’ or aboriginals. Aboriginals still live on this land in the same ways that they have for thousands and thousands of years. 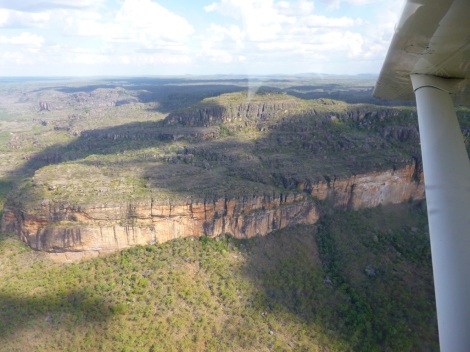 I was brought back from the abyss of bliss by the reality that this very large uranium mine co-exists, sort of on the edges of Kakadu National Park. It has been there since before the park was established. 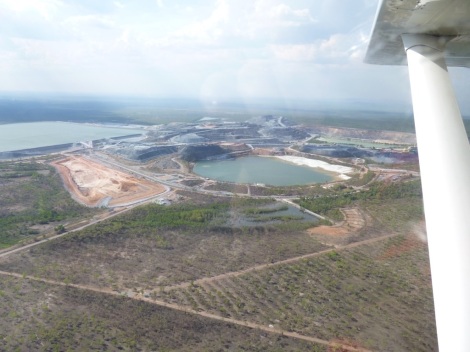 One response to “An Adventurous Broad Abroad – The Top End”